The Fire Tower  Russ Hanson
The goldenrod is yellow;
The corn is turning brown;
The trees in apple orchards;
With fruit are bending down.
The gentian's bluest fringes;
Are curling in the sun;
In dusty pods the milkweed;
It's hidden silk has spun.
--From “September” by Helen Hunt .

Every autumn in my memory Dad  recited the old poem he learned in grade school 80 years ago.  This same poem made Grandma Nettie sad.  “The golden rod turning yellow reminded me I soon would be back teaching school” she told us grandchildren recalling her school teaching days of the early 1900s.

It was the end of September 1970.  I was working for the DNR Fire Control out of Grantsburg, towering at from March to October.  It had been a quiet summer in the fire tower; a dry year but no smokes except the local dumps.

Fire tower jobs use your eyesight more than anything else.  I sat 100 feet above Fox Ridge just a few miles from the in and scanned from the river to the hardwoods to the east for smoke.   Since no one in their right mind can sit all day and just look around at the same scenery no matter how beautiful, I asked Uncle Maurice what he did when he was in the tower in the 40s and 50s.

“Whittling” he said showing me some intricately carved picture frames and a chain with a ball in a box at the end.  “I patched clothes, fixed things and even tried to write a poem or two” he added. “You just have to be very sure that you keep looking around carefully”

Whittling and poetry writing didn’t work for me.  So I brought a book to read—against the rules.  After each page I looked around carefully.  That kept me alert and as I read fast, kept me looking around most of the time.  I often stopped at the town hall and picked up 1800s record books to study.   I also watched the hawks or eagles swirl around the tower; studied the badger who lived below; used binoculars to follow deer crossing Maidment meadows to the north and watched the forest from the top down.

The first week I climbed the ladder on the side nervously hanging on tightly to each step and gingerly transferring to the platform and final steps into the tower.  It soon became routine.  The rare visitors to my perch were too nervous to do more than say hi and go back down.

When a storm rolled in, always from the west, we were required to stay in the tower until it rained hard enough to drown any lightning set fires in or Grantsburg.  Watching the storm approach with the lightning strikes coming nearer and the wind rocking the tower was exciting.  I wondered if lightning struck the tower while I was climbing down I would let go and drop to the ground.

My reports of smokes would be “black smoke at 270 degrees estimated 7 miles away—probably the Wolf Creek Dump.”  Each tower had a circular stand in the center with the top having the 360 degrees of a circle marked on it – 0 degrees being north.  On a pin in the center was a rotating alidade – like an open gun site.  When you saw a smoke you aimed at it and read the degrees from north.  The tower in Grantsburg would then sight the smoke and with the two sightings the fire location could be pinpointed on a map at the Ranger station crossing strings.

The tower was the third one to stand in .  fire prevention got organized in the late 1920s in our area. In 1932 a tower was built just north and west of the Sterling Townhall—look for the hill when you are on Evergreen Av before dropping down to cross the .  This was replaced by one 85 feet tall at the current location in the late 1930s and in 1954 the 100 foot tower was built.

The room at the top must have been about 5x5 feet with a 7 foot ceiling—a nice tiny room 100 feet up.  The top half of the 4 walls were windows that opened down to give you full air flow. It had a tiny wood stove and chimney for early spring or late fall.  It never seemed hot that high up with the windows open.  There was a stool and a telephone to talk to the ranger station at Grantsburg, but no electricity.   We had a tin can urinal to use and modestly dump out the window or could use the outhouse at the tower base.  Many times I was tempted beyond resistance to do fluid physics experiments with variable pressure water streams 100 feet in the air.

Sometimes I drove my Honda 55 with the scrambler sprocket on it out to the tower from home.   It went about 20 miles per hour and had a tendency to overheat and melt a hole in the piston or otherwise break down, but was small, narrow and good for driving though the woods on explorations.  At that time there were only a handful of people living west of the .  I asked Dad or Uncle Maurice or Lloyd about old places on the Barrens and then tried to find something left of the farm or home.   They had wintered on the trapping and hunting during the 1930s and knew it well.  The towering usually started at or when the dew had burned off, so mornings when we were caught up with haying at home were a chance to explore the old homesteads.


One September morning cycling down an old road near the tower I saw a beautiful morning glory blue colored flower.  There was only one bloom close to the ground.  It was small with a fringe around the bloom.  I picked the only flower and put it in my pocket and on my way back home stopped at Uncle Maurice and Aunt Myrtle’s to ask them what kind of flower it was.

Maurice and Myrtle were experts on local nature—to the degree that some of the rest of the family thought they were a little overboard in their enthusiasm for birds and flowers and prairie grasses.  They knew plants, flowers, trees, birds and wildlife better than anyone I knew.  They had lived on the edge of the Barrens for decades and both had worked for the DNR during the 40s and after and in many different roles including towering.  Some summers in the 40s they lived right at at the small house provided by the DNR.

Uncle Maurice said it was a Fringed Gentian.  He told me it was rare on the Barrens and made me proud when he said it was quite a find and most people had never seen one all of their lives!  He then gently said “When Myrtle and I find a rare flower like this one we like to leave it so someone else might see it and so it will go to seed and create more flowers next year.”  At that moment I understood them a lot better and took their advice to heart.   I have used my camera to pick rare flowers ever since.

A recent tower person recorded a video at the tower.  It is heavy on his toys and the equipment, but you would like to kick him in the rear and say point your camera out the window and look around!!
Climbing the Sterling Fire Tower
Fire tower video 1
Fire Tower video 2
Posted by The River Road Rambler at 7:54 AM 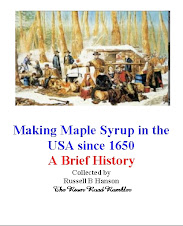 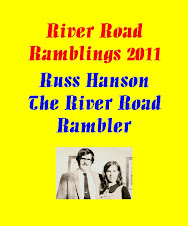 Latest Book from the Rambler at Amazon.com